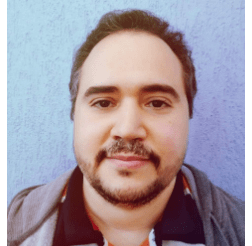 I’ve been working as a developer and Software Engineer since 1999 where I had the opportunity wo to work on many enterprise projects for companies like Hewlett-Packard, Sony Mobile and Motorola. In the past 9 years i have been working as a web and mobile team leader and architect using technologies as Java, JME, Android, Javascript, C# and Ruby.

I had the chance to work on a couple of Android applications using technologies as NFC, Bluetooth Low Energy, cloud computing, rest services, crash and analytics tools, to name a few.

I own a company that provides solutions for different platforms and technologies such as Java, Android, iOS (Swift), Node JS, Javascritpt, C#, Ruby and Scala.

I worked as scrum master, architect and designer in software development using mobile platforms (JME, Android) for Sony Mobile and other partners.

Participated in official evaluations for 2 CMM certifications, CMMi CMMi 3 and 5 of the Atlantic Institute, actively contributing to the development of software engineering processes in the years 2005, 2007, 2009 and 2010.

Participated as a requirements analyst, leading configuration management and project on mobility projects for Sony Mobile from 2007 to 2009.

Participated as a designer and business analyst in banking automation projects using JEE and JME platforms in 2007.

Participated as a designer and developer JAVA / WEB project in E2EA (End to End Automation Project) for HP (Hewlett-Packard) internationally from 2004 to 2006.

Participated in the design PinScel (Platform Research Cellular Systems), as a designer and developer for JAVA Telecom Brazil – CPqD in 2003.

Participated as a designer and developer in the Java XML project for the National Research Council of Campinas-SP in 2002.

Hired as a systems analyst at Atlantic Institute in October 2002.

I had the opportunity to perform technical support on servers and networks.

Bachelor in Computer Science at UNIFOR - University of Fortaleza