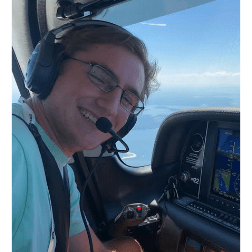 Founder of BusyBodies365; Aspiring Pilot Dedicated to the Community

Dayton Kingery, BusyBodies365 Founder and Greenwich, Connecticut resident balances a busy life as an aspiring pilot with a commitment to giving back to others. He has been pursuing his private pilot license at Performance Flight School in White Plains, New York, since 2018. Training on a Cirrus Model SR20 four-seat airplane, Dayton Kingery has completed three solo flights while accruing nearly 40 hours of flight time toward his license.

Dayton Kingery is the founder of Busy Bodies 365 - a website devoted to health, wellness and fitness.

Dayton Kingery also stands out as a longtime volunteer who has worked with local and national organizations over the past several years. Beginning in 2014, he has made multiple trips to Tanzania, East Africa, to volunteer with the poverty-alleviation nonprofit organization Mainsprings, where he has worked on a farm, served as a reading tutor, and raised funds for a solar power installation. Closer to home, he volunteered as mentor and homework tutor at the youth center for Inspirica, a nonprofit group that supports families and individuals dealing with homelessness.

Outside his flight training and volunteer efforts, Mr. Kingery serves as the founder of busybodies365.com, a website dedicated to the extreme sport of kiteboarding. In addition to a blog detailing Mr. Kingery’s kiteboarding adventures, the site will host photos and current conditions of international kiteboarding destinations.

You can also find him on
DaytonKingery.com
Crunchbase