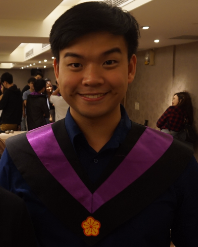 Think like an economist: Rational people think at the margin, but observe it before you start.

Main concern in modern labor or law and economics problems.

WE PEOPLE  I was the cover figure of the fashion magazine WE PEOPLE of January 2016.

Taxi and Uber  Written in my second thesis, I explained the problem of Uber and downfall of Taxi in Northern Taiwan.

Taichung City  I lived in the lovely and comfort Taichung City, Taiwan for over 12 years, including most of my school life.

Leader of Leaders  Best in leading and training a team of leaders, with association to the establishment of ECON-Mentor.

Visual Learner  To mimic moves, to learn skills, or to study applied subjects, I can finish my task after a single watch.

Awful Tester  I seldom have good scores in any tests except IQ test and mathematical subjects.

STATA  Most familiar with STATA while dealing with unfiltered data analysis in all fields of social science research.

Four Hours  I only sleep four hours a day between 23:00-3:00, so that I gain more free time to build my social network.

"hsuzchan"  My secondary Chinese name; written as Z.-C. instead of C.-H, used in multiple occasions and movements.

Professor Ming-Jen, Lin  Lin is the professor whom truly inspired me with economic intuitive training.

The Freakonomics Franchise  The series boosted my applied microeconomics logic in my undergraduate life.

Capital of the Twenty-First Century  The book inspired me to pursue humanity within inequality problems.

The Romance of the Three Kingdoms  The book is my favorite Chinese novel, associated with strategic thinking.

Flute  I learned flute for ten years, though I am still an amateur performer in student orchestra.

Mountain Dew  Mountain Dew is undoubtedly my favorite beverage since my days back in Canada.

Stroopwafels  Stroopwafel is my favorite snack since childhood, reunited with my life in my college life.

Dutch Lavender  My symbolic plant; the flower with the meaning of "Waiting for love."

The Flash  As my pursuit to higher speed and efficiency, The Flash (Barry Allen) is my favorite character in D.C. Comics.

King Stannis Baratheon  Stannis is my favorite character in the novel series A Song of Ice and Fire.

Bi-Spiritual  Until my 22th birthday, I lived in a "Bi-spiritual" environment; now still knowing supernatural phenomena.

Ascetic  As a long-living promise (not for religion), I would remain an ascetic to the day I marry.