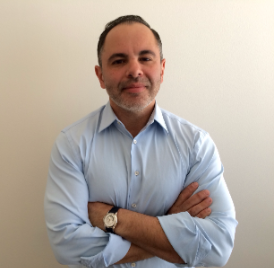 A hands-on company builder, Michael's background as an entrepreneurial CFO with three exits behind him, is the culmination of twenty years of senior management experience across a broad spectrum of industries. His expertise has been successfully applied across verticals ranging from startups to large public corporations including Blockchain, manufacturing, digital health & medical devices, consumer electronics & hardware, software/SaaS, and real estate.

In his current position, Michael is the Founder and CEO of FanVestor. FanVestor is an innovative data-driven investing platform, which enables consumers, both accredited and non-accredited, to invest into the careers and projects of talent, musicians and athletes.

As CFO, Treasurer, Corporate Secretary and Sect-16 Officer at DZSI (NASDAQ), Michael led the $46M Public Offering of Common Stock, the $40 million senior secured credit facility, the cross-boarder KEYMILE Acquisition in Germany, while getting rid-off of the "Going Concern" and material misstatements from DZSI' financials.

Earlier in 2017, (prior to joining DASAN) together with the other Blockchain industry veterans, Michael co-founded the ICO Governance Foundation, a non-profit decentralized global organization with a protocol-based global community mission that performs a self-regulatory function for ICOs in decentralized capital markets. In Oct 2016, Michael founded EdenCoin - a global cryptocurrency quantitative market-maker start-up with offices in San Francisco and New York: a proprietary liquidity aggregation platform to consolidate trading volume and data from major cryptocurrency market sources to run algorithmic market-making and liquidity provisioning, as well as other, quantitative strategies. From June 2015 to May 2017, while CFO at Breathometer, a hyper-growth digital health and medical device company, he helped take that company from pre-revenue to shipping in the FDA regulated space, forming OEM partnership with Philips, raising capital from venture capital firms and global strategic investors, as well as successfully achieving the ISO13485:2003 Certification milestone. Prior to Breathometer, Michael was the first employee (CFO, Board Member, and Head of SF Office) at BitFury, and helped build the market leading full-service Blockchain technology company, and one of the largest private infrastructure providers in the Blockchain ecosystem, taking it from zero to over $500M valuation and from 3 to over 120 employees in 7 countries between December 2013 through April 2015.

Master of Science (M.Sc.) in Management, emphasis on Organization Behavior and Entrepreneurship