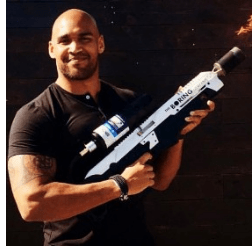 A resident of Los Angeles, Naymon Frank graduated from Oregon State University, where he was a member of the Division-1 football team. During his time with the team, Naymon Frank played defensive line and won three bowl games, including the Sun Bowl and the Emerald Bowl.

After graduating with a bachelor's degree in sociology, Mr. Frank began working as a state trooper with the Oregon State Police Department, where he earned the Oregon Department of Public Safety and Standards Defense Tactics Award. He has since held management positions at Target, Uniqlo, and Rocksolid.

Mr. Frank continues to work as a regional sales manager for Rocksolid, a soft-shell football helmet distributor. Supplementing his role with Rocksolid, he works as a sales manager with Tesla.

In his position at Tesla, Mr. Frank is responsible for sales and owner-advisor training. He was ranked as the top owner-advisor in Southern California during the first quarter of 2018 and was one of four employees chosen to attend Tesla's exclusive unveiling of its semi trucks and roadsters.