The Wall of CakeResume

CakeResume is known as a revolutionary hybrid in between a social media-based personal site and a resume which provides numbers of users with one page platform in order to introduce them in a professional, unique and also fully customizable way. Compared with a traditional resume that is typically text only and bland this one would use multimedia interfacing in order to allow numbers of users in terms of incorporating embedded links, videos, images and some other online tools intended for impressive virtual portfolio which advertises individual’s best assets. It would also make it easy to guide you to your potential employer through the most important parts of the resume.

There will also be an easy-to-use CakeResume Editor allowing users to effortlessly embed multimedia at the same time guide those users in terms of writing paragraphs, put style into the resume and also create a streamlined and sleek page which truly capture the individuality and so draws the readers about your story. And in connection with that, CakeResume has resume wall wherein there are numbers of featured samples of real resumes considered as the best ones. The Wall of CakeResume is known to be the place wherein you could search for talented and cool people willing to share themselves through their CakeResume. This wall could be the perfect place for you to witness the best resumes of those CakeResume users.

The featured resumes at the Wall of CakeResume are beautifully formatted and are all professionally written. Being examples, as many viewers could see these featured resumes, there would also be greater chance that these audiences will turn as users within a near time. Knowing that the best outcomes are posted in the said wall there would be no doubt that many users would as well aim that their resumes are to be posted in the said wall.

If you want your resume be posted in the Wall of CakeResume then better choose the said resume builder as your partner in writing resume. Using this tool will not just give you the opportunity of being included in the wall of CakeResume but will also provide higher possibilities of interviews from desired employers. Being in this latest generation, making sure that we are always doing our best to be ahead among others should be considered. And if we want a job, we should therefore have the best resume to start the journey of winning it.

Here are a few links that may be helpful: 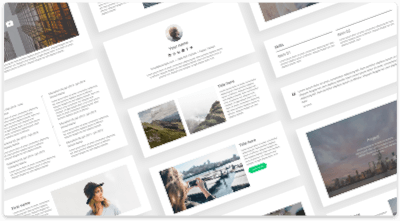 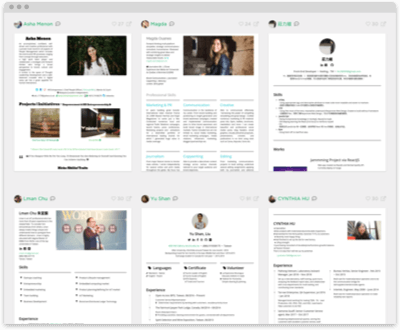 A study conducted by Analytics India Magazine reveals that there are more than 78,000...

Here are 6 freelance job sites you can consider. They are tailored to a diverse range...

Qualities/Tips For a Successful Freelancer

Freelancing is not easy to break into, here are the six qualities & tips you should...

For Freshers: Tips to Land Your Coveted Job

As a fresh graduate, finding a job can be a long and arduous journey, where you might...

For Freshers: Tips to Land Your Coveted Job

As a fresh graduate, finding a job can be a long and arduous journey, where you might...

Freelancers in 2020: Top 8 Most Lucrative Industries

In 2019, we saw a proliferated growth in the freelancing industry. For a...

8 Ways to Get a Better Job Fast

If you’re struggling to find opportunities in a tight market or if you’re looking to...

In this guide, you’ll learn why you should choose CakeResume over traditional resume or...

When it comes to finding a job or internship, it can be difficult to set yourself apart...

5 Ways to Build an Unstoppable Personal Brand in 2016

What’s the impression that others have after an interaction with you? That’s personal...

Your resume is much like your own brand to sell to your prospective employers. When you...